Plan your escape to the city 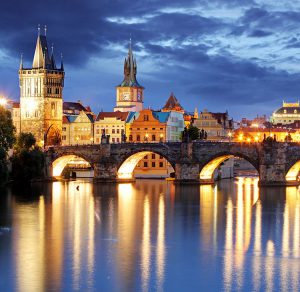 If you’re already dreaming about your next break away, how about considering a European city break? Here we showcase our favourite destinations

Nicknamed ‘the City of a Hundred Spires’, Prague is known for its Old Town Square, the heart of its historic core, with colourful baroque buildings, Gothic churches and the medieval Astronomical Clock, which gives an animated hourly show.

The city is home to a number of famous cultural attractions, many of which survived the violence and destruction of 20th-century Europe. Main attractions include the Prague Castle, the Charles Bridge, Old Town Square, the Jewish Quarter, PetÅ™ín hill and Vyšehrad. Since 1992, the extensive historic centre of Prague has been included in the UNESCO list of World Heritage Sites.

On your trip why not visit one of the city’s ten major museums, along with the numerous theatres, galleries, cinemas and other historical exhibits.

Prague is classified as a “Beta+” global city according to GaWC studies and is ranked sixth in the Tripadvisor world list of best destinations in 2016, with its rich history making it a popular tourist destination.

Interesting fact: From the late 1990s to late 2000s, the city was a popular filming location for international productions such as Hollywood and Bollywood motion pictures

The capital and most populous city of England, London, stands on the River Thames and has been a major settlement for two millennia. It was founded by the Romans, who named it Londinium.

A leading global city in numerous areas such as the arts, commerce, fashion and tourism, London is the world’s most-visited city, as measured by international arrivals and has the world’s largest city airport system, measured by passenger traffic.

Interesting fact: The London Underground is the oldest underground railway network in the world

After London, Paris is the second largest metropolitan area in the European Union and is especially known for its museums and architectural landmarks: the Louvre was the most visited art museum in the world in 2016, with 7.4 million visitors while the Musée d’Orsay and Musée de l’Orangerie are noted for their collections of French Impressionist art.

In 2015 Paris received 22.2 million visitors, making it one of the world’s top tourist destinations.

Interesting fact: Paris’s Gare du Nord is one of the ten busiest railway stations in the world, with 262 million passengers in 2015

With a population of approximately 7 million, Amsterdam’s name derives from Amstelredamme, indicative of the city’s origin around a dam in the river Amstel. Originating as a small fishing village in the late 12th century, Amsterdam became one of the most important ports in the world during the Dutch Golden Age in the 17th century, a result of its innovative developments in trade.

In the 19th and 20th centuries the city expanded, and many new neighborhoods and suburbs were planned and built. The 17th-century canals of Amsterdam are on the UNESCO World Heritage List.

With more than 5 million international visitors annually, Amsterdam is also the world’s most multicultural city with approximately 177 nationalities represented.

Interesting fact: The oldest stock exchange in the world, Amsterdam Stock Exchange, is located in the city centre

Vienna, the capital and largest city of Austria, is located in the eastern part of Austria and is close to the borders of the Czech Republic, Slovakia, and Hungary. In 2001, the city centre was designated a UNESCO World Heritage Site and in July 2017 it was moved to the list of World Heritage in Danger.

The city, apart from being regarded as the City of Music because of its musical legacy, is also said to be ‘The City of Dreams’ because it was home to the world’s first psycho-analyst – Sigmund Freud.

The historic centre of Vienna is rich in architectural ensembles, including Baroque castles and gardens, and the late-19th-century Ringstraße lined with grand buildings, monuments and parks.

Vienna is known for its high quality of life and between 2011 and 2015, it was ranked second behind Melbourne, Australia as the world’s most liveable city.

Edinburgh is home to the Scottish Parliament and the seat of the monarchy in Scotland. It’s also the second largest financial centre in the UK and the city’s historical and cultural attractions have made it the UK’s second most popular tourist destination, attracting over one million overseas visitors each year.

The city is home to national institutions such as the National Museum of Scotland, the National Library of Scotland and the Scottish National Gallery and is also famous for the Edinburgh International Festival and the Fringe Festival, the latter being the world’s largest annual international arts festival.

Historic sites in Edinburgh include Edinburgh Castle, Holyrood Palace, the churches of St. Giles, Greyfriars and the Canongate, and the extensive Georgian New Town, built in the 18th century. Both Edinburgh’s Old Town and New Town are listed as a UNESCO World Heritage Site.

Interesting fact: The Fringe Festival, which takes place in Edinburgh each year, is the world’s largest annual international arts festival

*According to the telegraph.co.uk